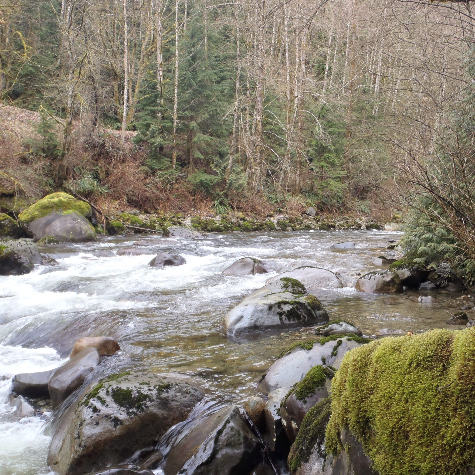 This theme explores the significance of Coquitlam's natural history to its identity and development, particularly the importance of the Coquitlam River, an iconic and defining geographical feature of the city that tangibly and abstractly creates a thread that resonates throughout the city's history.

Fed by numerous tributary creeks and streams, the Coquitlam River originates in the Coast Mountains near Indian Arm and flows south into Coquitlam Lake, a watershed region behind the Coquitlam Dam, and into the Fraser River. Coquitlam Lake and its associated reservoir provide the city's source of drinking water.

The Coquitlam River has been a source of life for the Kwikwetlem for millennia, a defining feature of the Nation's large territorial lands. The name, kʷikʷəƛ̓əm, refers to “red fish up the river,” a small early sockeye salmon that once ran in great number in the Coquitlam River and spawned in Coquitlam Lake. Elders talk of these sockeye as running so thick that it was difficult to navigate canoes.[1]

Coquitlam is uniquely situated with its southernmost boundary in the floodplain of the Fraser River, and its northern boundary deep within the wilderness of the Coast Mountains. The city sits within a glaciated landscape including a still-existing glacier created by the final Fraser Glaciation that impacted the region between 10,000 to 14,000 years ago. Other significant natural features include DeBoville Slough, a wetland ecosystem linking the Pitt River with Hyde Creek, and the Pitt-Addington Marsh Wildlife Area, both home to eagles, osprey, herons and other birds, and large and small mammals.

With the Fraser and Pitt rivers forming two of the city’s boundaries, nearby mountain peaks that include Burke, Eagle and Coquitlam mountains, and the presence of Mundy, Lost, Como and Lafarge lakes - the last two as former gravel pits restored as significant and beautiful ecological assets - as well as numerous creek corridors, nature plays a significant role in defining Coquitlam's character and identity.

The regional climate and geography have produced a rainforest ecosystem in the Coastal Western Hemlock biogeoclimatic zone, with vegetation that is dominated by western hemlock, Douglas-fir, western red cedar, red huckleberry, Alaskan blueberry and ferns, all resources contributed to the flourishing of Indigenous cultures.

Coquitlam’s geography has influenced its settler history, sometimes with significant impacts. Dam construction to provide the city's water has been devastating through its impact on natural waterways and Kwikwetlem traditional lands, particularly for decimating the sockeye salmon run which gave the city its name and remains a key issue for Kwikwetlem today. Coquitlam river flooding over the last century necessitated dyking projects beginning in the 1990s.

The city is fortunate to be infused with nature. City Centre connects nature and culture, while Mundy Park epitomizes this theme as a significant link between the city's uplands and lowlands, playing a role in the regional green network and providing a critical heart of green infrastructure. Parks abound, the city’s dykes are recreational amenities, and the nearby mountains, historically supporting skiing, now host mountain biking, hiking and other outdoor recreational opportunities. Coquitlam can truly claim "fun is in our nature."