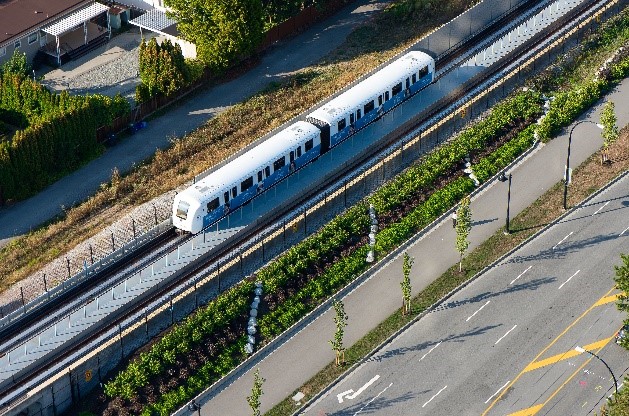 This theme focuses on the importance of transportation and communication, historical and current, to Coquitlam.

The Coquitlam and Fraser rivers have provided a travel route for the kʷikʷəƛ̓əm, Kwikwetlem First Nation, since before remembered time, with the village site of slakəya’nc located near the meeting of the Coquitlam and Stó:lō (Fraser) Rivers. Canoes remain an important cultural element for the Kwikwetlem, illustrated by a historic canoe dedication ceremony that took place on the Riverview Lands.

River transportation and rail and road construction have been fundamental to Coquitlam’s settlers and city's development and character. The city’s growing forest and agricultural economies required transportation routes, and the physical environment influenced the ways in which people travelled and how goods were shipped.

The city’s position with easy access to the Fraser River made it a choice location to settle and develop settler economies. The first shipments of lumber from Fraser Mills were by ship from the company’s docks on the river.

The first roadway, the Pitt River Road, was constructed in 1862 by the Royal Engineers linking a ferry landing used for crossing the mouth of the Coquitlam River to New Westminster. The construction of North Road between Indian Arm in Port Moody and the Fraser River waterfront in New Westminster provided access for the settlement and development in Coquitlam, and today remains a major transportation corridor.

The Coast Meridian Road was formed out of the original survey line that aligned with the Dominion Survey system and was located approximately 122°45 west longitude. Coquitlam's Townships 39 and 40, surveyed in 1874-75, lie west and east of the Coast Meridian respectively, establishing the gridded lot pattern of the city.

Another major impetus to the creation of the municipality was the establishment of the Westminster Junction spur line of the Canadian Pacific Railway to the Fraser River port of New Westminster in 1911. With the completion of the spur line offering another transportation option, the area’s farming and logging industries began to thrive.

Coquitlam received a major boost in the mid-20th century with the 1953 opening of the Lougheed Highway to Vancouver along the north side of the Fraser River, making the city more accessible and setting the stage for increased residential growth. The original Pitt River Bridge was opened in 1957 by Premier W. A. C. Bennett, extending the new highway eastward. The completion of the Port Mann bridge in 1964, helped turn Coquitlam into the modern suburb it is today.

The Arrival of the SkyTrain Evergreen Extention

In 2016, as part of the burgeoning city centre, the long-awaited Evergreen Extension of the Millennium SkyTrain Line opened in 2016, running from Lougheed Town Centre in Burnaby to Lafarge Lake in Coquitlam, further solidifying City Centre’s future as a major nexus of the region’s northeast. The city has four SkyTrain stations on the Millennium Line that are a part of the extension. Prior to the Skytrain extension, in 1995, the West Coast Express established the first frequent passenger rail connection to Coquitlam’s City Centre.