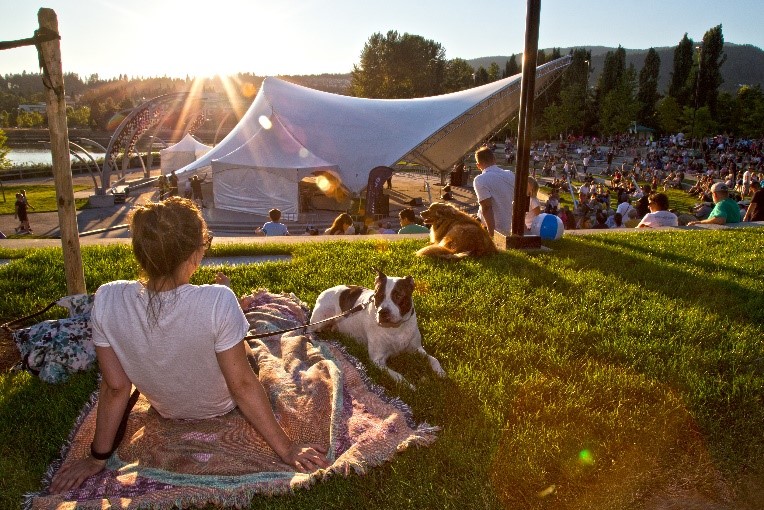 This theme explores Coquitlam's distinctiveness, through key city elements such as arts and culture, significant achievements, and urban and neighbourhood character. Understanding the city's unique social, cultural and physical context can assist in more people in the community seeing themselves reflected in the city's heritage.

Indigenous culture is a critical part of Coquitlam's roots and identity. Acknowledging Kwikewetlem First Nations traditional lands and creation stories that establish the earliest and ongoing relationships to the land are essential for reconciliation.

As the greater Vancouver metropolitan area grew, Coquitlam became a new place to live. While some felt that Coquitlam would never thrive as a bedroom community, developers building residential subdivisions found buyers for the large treed lots and modern houses on newly created streets up the mountain slopes.

Coquitlam's geographical location with its southern boundary next to the Fraser River and its northern boundary within Coast Mountains has created an urban and human geography that varies from the southwest to the northeast, resulting in microcosms of diverse history and culture across the city. The histories of Maillardville, Riverview and Little Korea are different from the northeast's proximity to nature or the urban City Centre. Acknowledging that the city's different neighbourhoods are individual entities contributes to Coquitlam’s identity. These historic neighbourhoods, each with their own heritage, physical and cultural context, and landscape and architectural traditions are evolving into modern communities designed for the future.

Coquitlam's identity is defined in part through its arts and culture context. This is found in community arts organizations and places such as Place des Arts and the Evergreen Cultural Centre, public art and the city's many individual artists. It also connects to the BC film sector prominence in Coquitlam, where locations across the city are used as backdrop for major productions. The City’s current efforts to develop a new South West Arts & Heritage Centre demonstrates the value placed on arts and culture by the community, and is a sign of the future contributions and role arts and culture will continue to have in the city.

Other City initiatives that contribute to Coquitlam's identity is the creation of destination green space in Town Centre Park, a former gravel pit and the sustaining of a robust urban tree canopy, both of which underscore the importance of nature in the community. Coquitlam Centre, a Tri-Cities retail hub since 1979, now being master planned as a new town centre, reinforces Coquitlam's urban core as a destination and not a through route to elsewhere. Iconic and remembered places such as the mall, the Westwood Racetrack and others are ongoing contributors to the city's identity.

The city's distinctiveness can be found in its celebration of high-profile residents who have made significant achievements in their respective fields, including Academy Award winners, musicians, architects, medical professionals, politicians, social change-makers, athletes and others.